We came home from a meeting (the three drivers under our roof) at 10:00 a.m. last Saturday.  We pulled into the garage and there in the doorway leading from the garage into the house were Clark and Phil, dressed and with their coats and shoes on.  They were supposed to be at the bowling alley over an hour earlier and the designated driver (a married brother who lives two miles away) had forgotten to pick them up and deliver them to the bowling alley five miles away.  I looked at my sons standing there dressed and ready and still so expectant and innocent.  They just knew their brother would come.  It tugged at my heart.  We called the negligent driver and found him very repentant when he was told what he had forgotten.  Clark and Phil don’t have a current phone number for him but may not have called anyway since they were unaware how much time had elapsed.  There will be no more conflicts this bowling season since it will be coming to an end in two weeks and won’t start up again until August.  Track and Field practice begins the middle of March. 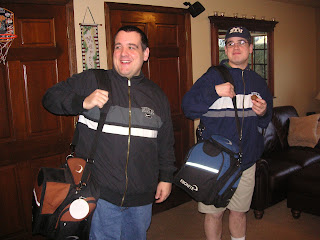