We were on vacation. It was Sunday and we were in church where we felt the familiarity and were glad to be united with others in a peaceful atmosphere. I looked at my family and noticed Clark was wild-eyed, like he was on medication overdose. The frequency of these episodes has increased in the past year, coming a few times a month. I know what an overdose looks like. When Clark was a young teenager he was on Dilantin, one of his anti-seizure medicines. I couldn’t understand why he was falling over on his bicycle and acting tipsy and why his eyes were wild looking. We visited the doctor and were told this medicine can pool in his system so when we cut back on the amount he was taking he improved. But he has been off Dilantin for years.

We were in a Sunday School class in the chapel so I took Clark to the back pews so he could lay down if he needed to. I sat by him, putting my hand on his arm or back and watching to see what type of help he needed. Often his speech is slurred when he goes through this and in general he does not feel well but it only lasts a few hours and then may not return for a week or two. On this particular day with no other distractions I stared at Clark and tried to imagine what he was feeling and once again thought about his life. Life is good for him. He knows he is loved. I thought about his sense of security and confidence. And as I sat there watching his face a profound feeling of assurance and calm came over me telling me that I am where I am supposed to be, doing what I am doing, helping two special sons who have fragile X. Most friends my age are empty nesters but we never will be and I’m glad. From “A Journey Called Life” by an unknown author “Each of us is a vital thread in another person's tapestry. Our lives are woven together for a reason.”
Posted by Pat Tucker at 10:38 PM 1 comment:

Wednesday was a trip to the eye doctor for Phil and his driver—me. His anxiety was in full force from the time we exited the car in the parking lot and then re-entered it two hours later. This was his first time to Dr. M. In fact, he had not been to an ophthalmologist since he was a toddler. Phil was born with strabismus and had corrective surgery when he was nine months old so we spent many hours in the waiting room during the first three years of his life.

The visit on Wednesday was a routine eye exam but a new doctor and a new office presented perfect ingredients for anxiety. We entered the waiting room, signed in, and were handed a stack of papers to fill out and sign. When I returned them to the receptionist a few hours later Phil followed me and proceeded to kick me playfully in my posterior. My warning “That was not appropriate!” was greeted with laughter.

“Mr. Tucker” was soon announced. Phil informed me, the nurse, and the waiting room that he was not Mr. Tucker, he was Philip. He stood up and beckoned me to follow. I realized when I sat down in the exam room that my palms were sweaty and my heart rate had increased considerably. The nurse asked Phil to read the smallest line he could. She might as well have been speaking in Russian. She caught on quickly that that approach would not work. She then started showing him single letters in various sizes while repeating over and over “Keep your left eye covered. Don’t peek. Now keep your right eye covered.” When she finished I followed her out of the room and asked if Dr. M. would be able to handle Phil. She assured me he would. I had my doubts.

We were left alone until Dr. M. arrived. Phil examined every instrument, every button while exclaiming “This is big, where is the up/down button, this is for my chin, this is….” and on and on and on he went. Constant motion. Finally in came Dr. M. After they shook hands Phil immediately wanted to know if Dr. M. was married. “Yes.” “Children?” “Yes, in fact, it is my daughter’s birthday today. She is nine.” He had more questions but they waited until after the exam which was quick but thorough. On the way to the car Phil asked where Dr. M. parked his car and where is his house? I had to admit I did not know the answers to all his questions.
Posted by Pat Tucker at 4:46 PM 1 comment:

A vacation is no excuse for not exercising and that included Clark and Phil who were required to walk every day. Excuses were abundant “But we’re on vacation.” “It’s too hot.” “My feet hurt.” “I don’t want to.” until they realized we meant what we said. They had to walk 1 ½ miles on a path that ran in front of where we were staying. “Okay,” we told them “you only have to walk to ‘Cat in the Hat’ and then you can come back.” Since they didn’t know what we were talking about we walked with them the first time to point out the turnaround point (1 ½ miles roundtrip). 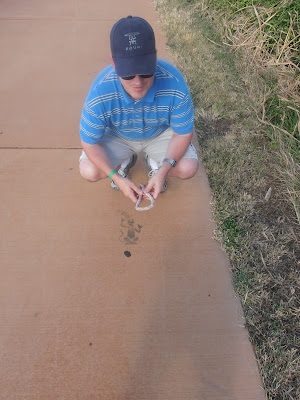 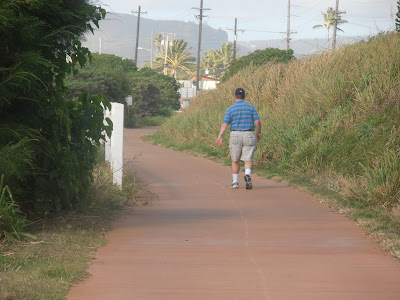 Phil is a no nonsense guy. If he knows he has to do something he gets up and gets going so when he would leave Clark behind Clark decided he would rather walk three miles with Paul and me than 1½ miles on his own. There was an unexpected bonus to walking with us. He could throw rocks to the rocks below when we stopped to watch the ocean. It was a good vacation with a few miles put on our feet. 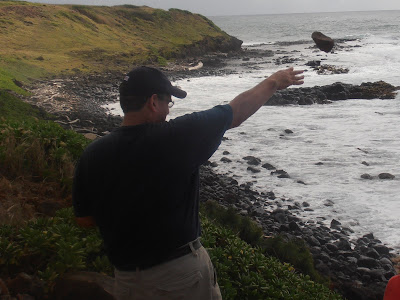 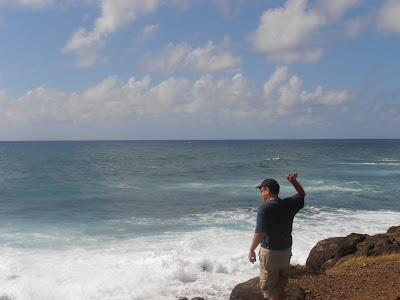 Posted by Pat Tucker at 5:16 PM No comments: