It was a week ago that Clark had a complete physical. He’ll be getting one yearly since he is now 40. Yikes! To me he is still the young boy who only needs a physical periodically (excluding yearly visits to the dentist and also to the neurologist because of his seizures). My husband and I took him with a small list of questions to ask the doctor. Part way through the physical Paul needed to leave for his scheduled racquetball game. I was surprised to find Clark finished when I returned after taking Paul to meet up with his racquetball buddy. Clark showed me his arms, each with a bandage, and tried telling me something about going to the hospital.

“Did you give blood?”

“Did they fill a small vial with your blood?

“Why do you have two bandages?”

“I’m going in to talk to the doctor and you can stay in the car.”

The doctor, a long-time family friend, explained to me that he did indeed get one vial but two are needed. He had trouble with Clark’s veins (and didn’t want to hurt him) so we were to go to the out-patient clinic by the hospital for a blood draw. We went. I was happy to report when we checked in and I handed the receptionist the prescription that Clark had been fasting. We sat in the waiting room. Clark picked up my book. I was amazed that he quickly found words like “Rose” (his sister-in-law), “Thomas” (the name of a friend) and “Fox” (that’s what he calls fragile X—F.O.X.) but we mostly watched a young teenager with multiply problems who sat with two adults, one on each side of him. He was blind, couldn’t talk (he signed the word water) and had difficult behavior. When he was handed the glass of water he threw out his arms and the water soaked the front of his sweatshirt. When he was told he would have to take off his sweatshirt he decided he wanted more off and tried taking off his shirt and was successful in taking off his shoes. I was hoping the adults would look at me so I could give them a smile of encouragement. I know what it is like to sit in a waiting room with unruly children who do embarrassing things that attract attention. His name was finally called and then Clark’s. While Clark was giving blood (he has no fear) I opened my purse and looked for the granola bar I had put in before we left home. I knew Clark would be hungry. As he emerged I found an empty wrapper. When I confronted him he told me he was very sneaky. Yes indeed. Guess when he had eaten it—while I was in talking to the doctor and he was sitting in the car.
Posted by Pat Tucker at 5:27 PM No comments:

Someone noticed we hadn’t yet seen Clark today. I left the study, walked down the hall and opened his door. 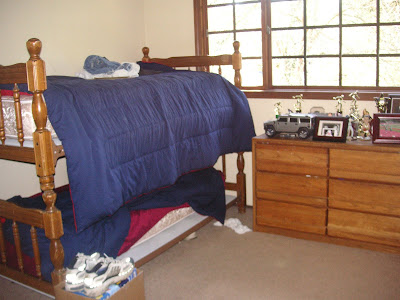 I could see slight movement from the covers. When Clark and Phil shared a room Phil was on the top bunk but he moved out and into our youngest’s bedroom when she moved out of the house. I used to fix the top bedspread so it didn’t hang down but Clark kept putting it back so I’ve given up. He likes the tent effect. 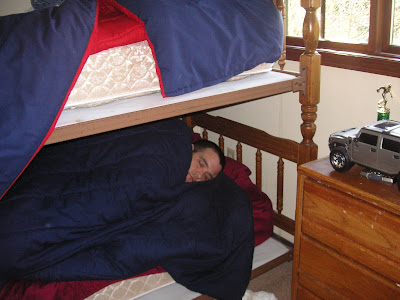 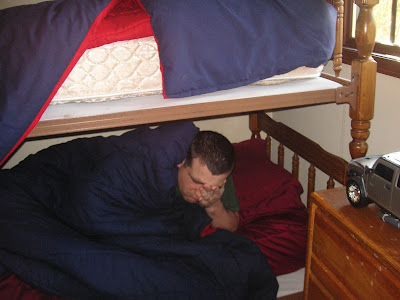 Even before I had swung my feet out from the under the covers a little before 7:00 I could hear the treadmill going in the room beneath our bedroom. Who is that? Phil never gets on the treadmill, Cherlyn is at work and Clark sleeps in and doesn’t get on the treadmill until he has been prodded and threatened. It wasn't long until the question was answered. Clark came into our bedroom and informed Paul (who uses weights while Clark is on the treadmill) he would have to exercise alone because “I beat you.”

I left our room and went into the study. Phil was just getting ready to go outside for his mile walk. I know he loves it when he sees me going on my walk at the same time and we pass, Phil on one of the street and me on the other, so I hurriedly got ready and went out. Finally I could see him coming toward me laughing loudly and picking up his pace as I pretended to pick up mine. I walked to the corner and crossed the street. Soon I could see Phil’s legs facing my direction (his body was hidden by tree limbs). I could tell as soon as he saw me—he turned and started running out of sight. I kept walking and soon turned to go up the hill. Toward the top I could see Phil again and, of course, as soon as he saw me he turned and starting running again. Well, needlesstosay, he was on our street ahead of me. When he saw me he laughed again and said “I beat you.”
Posted by Pat Tucker at 7:36 PM No comments:

My youngest, a daughter who is married with two young children, started a blog about a week ago. I got permission from her to include this post on my blog. Her bedroom was directly across the hall from Clark's and Phil's.

“This video cracks me up!

It reminds me of my 2 older brothers who have fragile x syndrome. Growing up they shared a room. There would be times when we were all in bed and I would hear Phil (he’s Ernie) laughing and making comments to Clark (he’s Bert). Clark wants nothing to do with the conversation cause it’s bedtime and if they don’t go to sleep they will get in trouble. These comments would always egg Phil on to being more loud and obnoxious and sometimes cause him to get up and turn on the light just to bother Clark. Clark’s remarks were much like Bert’s in this video “knock it off, Phil”, “go to sleep, Phil”, “turn off the light, Philip!”, “I’m telling Mom on you and you’re going to be in big, BIG trouble.” 15 years later their comments to each other are still the same :) I sure love my brothers! And they provide for great stories!”
Posted by Pat Tucker at 7:58 PM No comments:

What a Pig Sty! 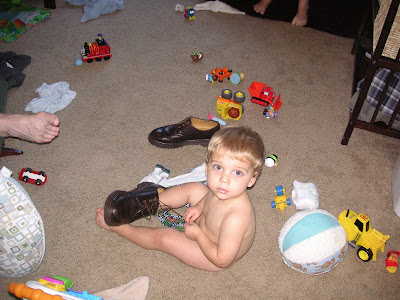 Phil, the tidy, organized one, cannot tolerate much mess before he is mumbling about the pig sty and picking up and putting away toys and stuff that are strewn around. When we have two very little people here the messes occur constantly. But he and Clark take time to play with the two messy ones. 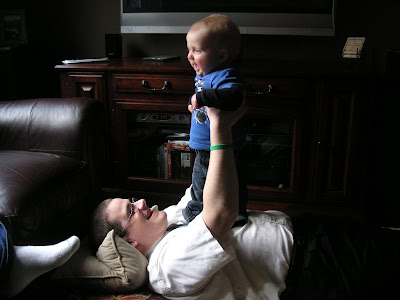 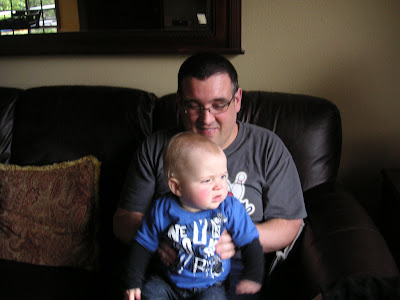 Posted by Pat Tucker at 6:16 PM No comments: 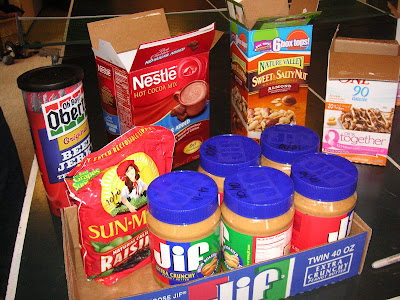 It is that time of year again that seems to come more often than every six months. I always start out feeling organized and enthused twice a year as we take out the old and put in the new in our 72-hour emergency backpacks, discarded backpacks from years gone by when our kids were in school. We spread the backpacks out on the ping pong table with each person responsible for one or two. My jobs include buying replacement items and supervising two in particular who are responsible for retrieving the backpacks from hooks in the garage and then returning them when we are finished. I am also the receiver of the old items and the distributor of the new which sounds simple but can quickly descend into chaos. “I need new peanut butter.” comes from one side of the ping pong table. “I need granola bars.” from the other and I am trying desperately to keep the old separated from the new. Why do we put ourselves through this??? Actually that question is simple to answer. We have seen the devastation that comes when an unexpected disaster hits and we want to do our part (which includes Clark and Phil too) 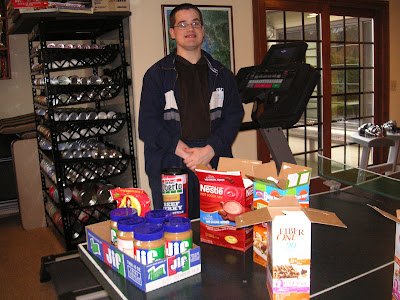 so that we could survive for 72 hours. 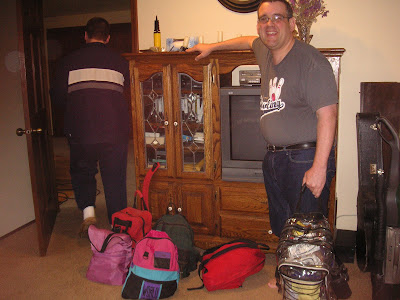 Posted by Pat Tucker at 7:52 AM No comments:

It was a fast 10-day trip for us but a very long 10 days for Clark. It was reported that he wouldn’t smile for the first two days we were gone but from there it got better until we returned. One of the endearing things about bringing back gifts for Clark and Phil is they can be simple and inexpensive—just something that says we thought about them. 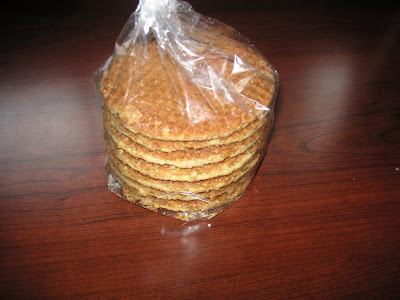 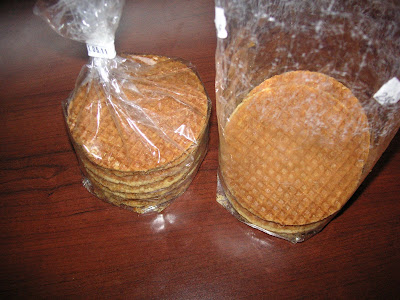 Unique cookies called roomboter stroopwafel from The Netherlands were the gifts for each of them for this trip. What would they have done with wooden shoes or a bouquet of tulips anyway?
Posted by Pat Tucker at 9:35 PM No comments: