It started Monday morning after I had already left for my class. Paul received a call that one of our granddaughters was sick and would he pick her up from school. As he and Clark were returning home from picking her up he received another call that a good friend of ours whom we have known for over 36 years had just died and would Paul come to the house. He was within a few blocks so he turned the car around and went there to be with the daughter, a grown woman who had been living with and caring for her 90-year old father. The death was not unexpected. When they finished talking, the daughter asked if Clark who was sitting in the car with the sick one would like to come in and see her father. When Paul got to the car to ask, Clark was out of the car almost before he finished the question. Five minutes later he emerged and talked about our friend until they arrived home. A few days later the daughter, with a smile on her face, told us what had happened when Clark came into the house. First he hugged her and then proceeded to offer words of comfort and assurance and then another hug and he was gone.

Whether it is 24 degrees Fahrenheit outside or 94 degrees Clark wears sweats to bed and a short-sleeved tee shirt and socks and Phil wears black shorts and a polo shirt. I didn’t realize Clark was bundled up while we were on vacation until it was pointed out to me one morning that he had socks on (and perspiring). Consistency is important for Clark and Phil but there is also their innocent dependence on us, their parents, to help them see or understand something—like taking off your socks when you go to bed will help you feel cooler during the night when the outside temperature is over 70. I am ashamed to admit that I am still sporadically negligent in putting sunscreen lotion on them while we are on vacation and often when we are outdoors for a hike or bike ride. They would never think to put it on themselves so as a responsible parent I should but I even forget to put it on myself.
Posted by Pat Tucker at 6:52 PM No comments:

A library card is a must while we are vacationing. It was two years ago I discovered that McCall Smith had not stopped at five books in The Ladies Number One Detective Agency series so serendipity took over and my reading plans for vacation changed. Books I had brought to read were set aside. Part of the routine at the library is checking out movies so we have something to watch in the evening, all together, when the activities of the day have come to an end. One evening after dinner we walked to the library, all five of us. The library is two blocks away just off the trail that runs along the ocean. We found a couple of movies to last until we returned home and then we walked back, all together, in the darkness and the warmth, feeling safe and contented. Because the readers in the family always have a book they’re reading Phil usually checks out two books. 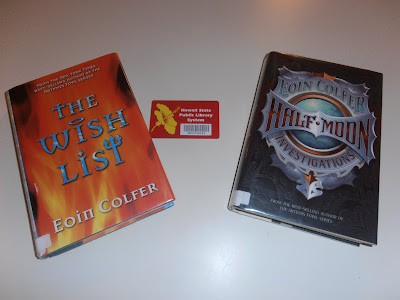 Phil the nonreader now gets books without pictures he has found in the children’s section. He puts them on a shelf or in a drawer until it is time for them to be returned. Without being given the assignment Phil took it upon himself to be the person responsible for returning movies and books to the library, usually delivered while he was on his mandatory walk.
Posted by Pat Tucker at 1:13 PM No comments:

Here is something I wrote a while ago about another exciting excursion our family took in July. 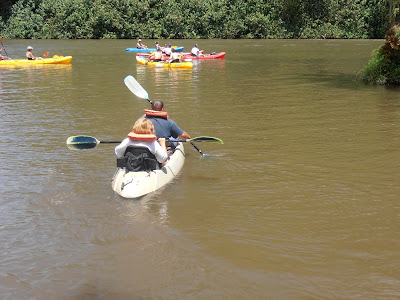 "Yesterday was our kayak trip on the Wailea River, Clark and me in one kayak and Paul and Phil in the other. We paddled up the river about 30 minutes and then docked our kayaks on the shore, 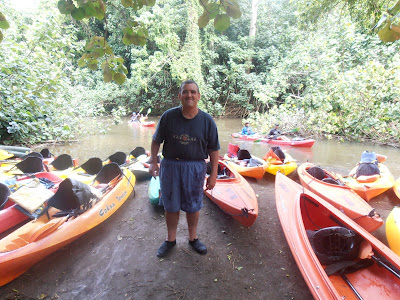 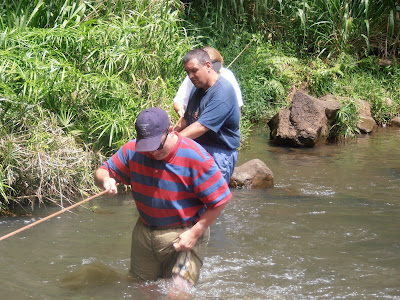 along with a dozen other kayaks already there, before we hiked a mile to Secret Falls hidden in the rain forest. A canopy of trees sheltered and shaded us most of the way as we crossed the river holding onto a rope, waded through a stream or two and scaled a steep part of the trail by holding onto tree roots. 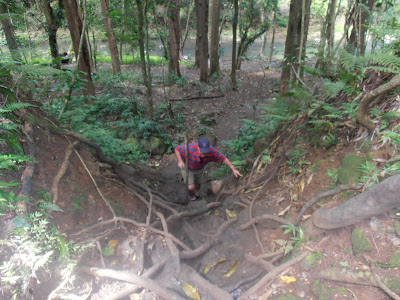 It was hard work at times but we were rewarded with a hidden waterfall that falls into an icy-cold pool. In a previous year we swam in it and stood for a few seconds under the falls while it pounded our heads. 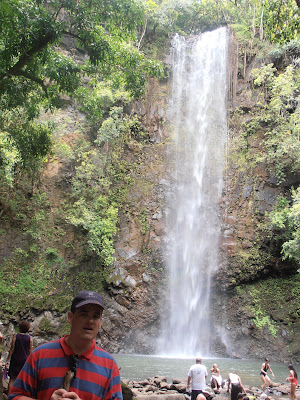 Before we started our adventure Phil had separated himself and was sitting on the dock alone. He was solemn and quiet but as soon as we joined him on the dock there were loud outbursts, laughter and slightly out-of-control behavior. “Phil, are you nervous about going in the kayak?” Without hesitation “Yesssss.” Clark’s anxiety showed on his face. We got into our life jackets, slid into the kayaks and were off, Phil laughing and Clark complaining. Clark and I have been partners before. I know the routine. We try to stay in the middle of the river but are soon visiting the vegetation overhanging the river. Clark’s grumbling begins as he tries to get us out of the branches and I start laughing. As soon as we’re out of the vegetation we try again. I’m feeling encouraged when we actually make it 50 yards before we’re back in the vegetation on the other side of river, then a repeat of the grumbling, the laughter. Eventually we make it to our destination, dock our kayaks and begin the trek. Two miles later, two falls on the trail and one fall in the river (Phil yanking on the rope in an attempt to knock Clark off his feet caused him to fall backwards) and many mosquito bites we were ready to tackle the river on our return trip. Clark’s anxiety was at a high. He was threatening to report my laugher to Bishop Biehl. I must admit my patience almost ran out but then the village appeared and we made it back to dry land without landing in the river. It was hard work at times and I was amazed at times at how well Clark and Phil did overall. We’ll do it again someday." 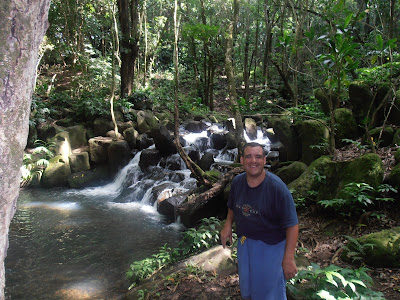 Hard to imagine this happy face looking anxious.
Posted by Pat Tucker at 4:27 PM No comments: 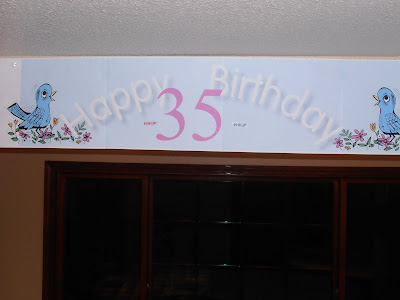 A combination of having our #3 son and his family here from Australia for almost two weeks and Paul and me out of town for a few days my writing has been sparse. Before #3 son returned to Australia we celebrated Phil’s 35th birthday two days early. Initially when I told him what I had planned he informed me that the 26th was not his birthday. Then when he realized it was his party and he got to choose the food (tacos) and cake (a heart cake with his name written in M&M peanuts) he got into it. Everyone was there except our youngest and her family of four and #2’s wife who is working on an MBA. We don’t know how to have a quiet party and this one was no exception. 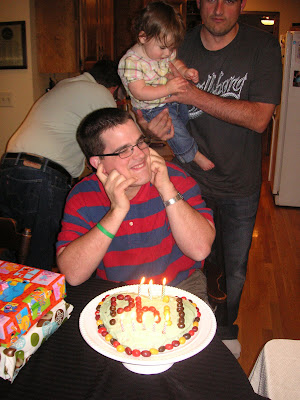 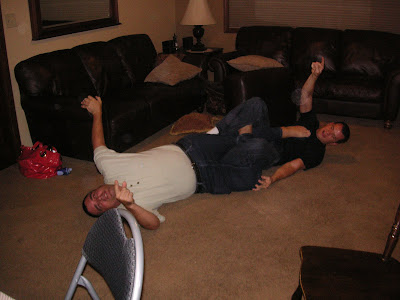 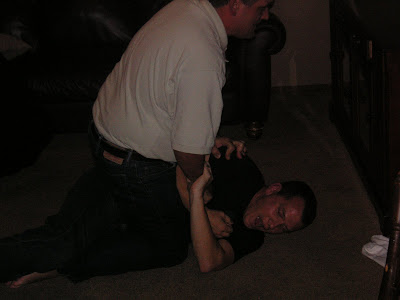 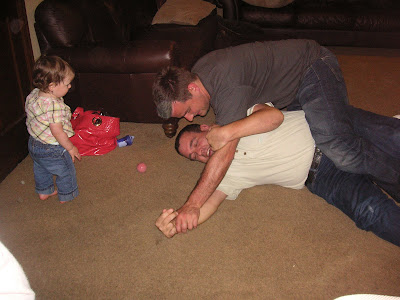 Here is Phil's thank you to an aunt and uncle who sent him some money ready to mail. He dictates his message to me. I type it on the computer and then print it. He then copies it onto the card so the thoughts are his and it is written in his own hand. 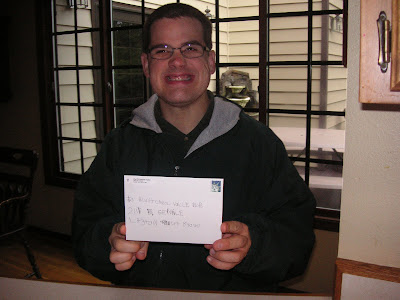 Posted by Pat Tucker at 7:31 PM No comments: