I Can't Believe He Said That!

I am in Utah at a Women's Conference where I will be speaking tomorrow. I'm here with one of my daughters. We called home this morning to say hello to Paul and to find out how things had been going since we left 24 hours ago. While we were talking we realized Phil was on the line so he joined in on the conversation. When it was time to say good bye Paul told me he loved me and then I heard "I love you Sweetness." "Did Phil really say that?" I asked Paul. He confirmed while Phil said "Oh boo hoo." in an affected voice. That is usually how he responds when I tell him I love him. He has told me before that he loves me but so rarely that it is indeed special when he does.
Posted by Pat Tucker at 8:59 PM No comments:

It was cold Saturday when we went to the district track meet for Special Olympics. Despite an occasional glimpse of the sun the wind kept us all zipping up our coats and pulling up our hoods BUT it did not rain and for that I was grateful. Through 25 years of Special Olympics we have seen all types of weather and pouring rain is pretty miserable for all.
We were there at 8:30 a.m. along with three Husky cheerleaders, Channel 5 News, volunteers and hundreds of athletes. After the National Anthem, the Special Olympics oath “Let me win, but if I cannot win, let me be brave in the attempt.” presented by an athlete, we heard the familiar words “Let the games begin!” To capsulize the day’s events, Clark got a gold in the 200m dash, a bronze in the 50m dash, and a fourth place ribbon in the shot put. Phil got two golds in the 100m and 200m dash and a silver in the relay. Clark always takes his medals to church the next day for show and tell. A woman shared with me how touched she was when Clark came up to her and her husband and showed them his medals. 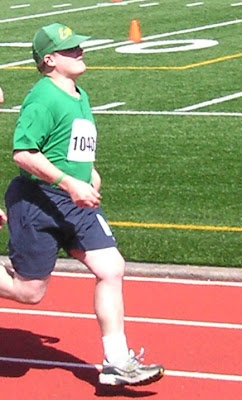 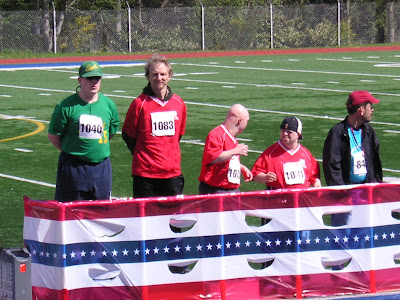 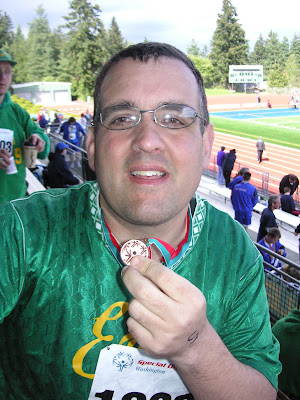 A Visit to Yet Another Neurologist

Visit sounds too friendly. Clark puts the idea of an appointment with another doctor (he is very partial to his primary-care doctor) in the same category as having to have all his teeth pulled out—without Novocain. Anxiety kicked in the moment he heard about the appointment. The only way to get him to stop talking about it is to remind him a zillion times that the appointment is not for a long, long time. Twenty-four hours of anxiety is indeed a long, long time. We receive a reprieve when he is sleeping. The conversation starts up again first thing the next morning.
“I’m not going.”
“We will be there with you.”
“Why I have to go?”
“Because we are trying to figure out things with your seizures.”
“Why?
“Because maybe there is some better medicine.”
Now the conversation circles around to the beginning.
“I’m not going to that doctor.”
“You have to go because the doctor is expecting you and we’ll be there with you.”
He softens. “I don’t want to go.”
“I know but Dad and I will be there.”
And we were. We just got back from the second neurologist in two weeks. In today’s visit, we were first seen by a resident who was amazing. She was the warm-up act. Anxiety drained from Clark’s face as she had him walk, balance on one leg and then the other, touch her finger tip and then touch his nose, and so on. She was patient, kind, and had a friendly face. By the time the senior neurologist came in Clark was relaxed and peaceful. I did see any white knuckles or hear any mutterings (“One more chance and I’m telling my friends!”) under his breath. Now we need to decide what the next step will be but until then there are no more neurology visits on the horizon.
Posted by Pat Tucker at 7:49 PM No comments: 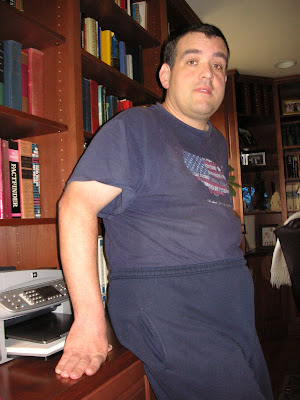 Clark came into the study yesterday morning talking and it was like he had been wound up and could not stop. Even when I told him it was quiet time, he could only be silent for a minute before the talking would resume. So when he came into the study this morning talking I decided to type what he was saying. This amounts to about 1% of what he said since I couldn't keep up.

“Tonight’s the night. (Date Night at the Institute) How we set up the tables? (he’s been doing it once a month for over three years) What we have to do is get out of here—at 5:30? It’s totally dark here. (It actually doesn’t get dark until 8:00 this time of year.) We have to turn on the headlights. Who’s going to dump the garbage? (at the end of the evening when we’re cleaning up) Who will? Why you take a picture of me? Why? Look at what your husband is doing. He is spilling on the floor. I think your husband needs a little talk—with him. What time? Oh, we leave here about 5:30 and C. be coming right home. That be good. (sees a journal on my desk) How many names you wrote in there? I love you, Sweetie. We have to pay them $5. The whole thing. You have to pay. Brother B and Sister B have to pay too. She comes in. He just beat you Mom. Your son just beat you home. (Phil did indeed beat me in going for a walk.) How’s my eyes look? There’s something on your eye. Take out a wash cloth—it doesn’t hurt. How we going to do this tonight? (Clark, can you please stop talking! Paul says. Later, I turn around and notice the earphones he has put on.) Look your wife is working really hard. She is typing on the computer. What lesson you talking about? Whose name is that (points at his and chuckles)? Oh T., you see him? What T. say to you? Did you show him the fish at Dr. P’s? I have him. Ow! Mom? I just hit my toe. Bang. (It actually happened the day before.) I walked all the way to the B.s house. I love you, Mom. (leaves for a few minutes and comes back with Care Bear cards) Your husband’s going crazy. He’s eating too much food. 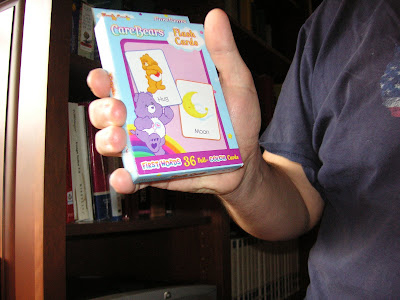 He’s eating Cheerios. He get sick eating too much food. Chatter lips. (He then looks out the window.) Mom, look at the lawn out there. It’s coming pretty good. (gets a family photobook off the shelf) Oh look. That’s right. What? Ah, look. How cute. He’s holding my shirt. Yep. That’s right. There’s our room. There I am. C. be coming up with us? I think he will. What this book cost? I could pay one. Where’s you get it at? At the little store. The bookstore. Just like this? (leaves again and then returns) Philip going to be showering in C.’s room. Why? Sometimes I get scared. Just sitting there. Now, wait a minute. I think C. put in the wrong medicine. (for his seizures) Please, Mom, I don’t want to get sick anymore. Hey, wait. That’s the day we’re traveling to I.F...."

He’s quiet now and drawing a picture (Moses he tell me). 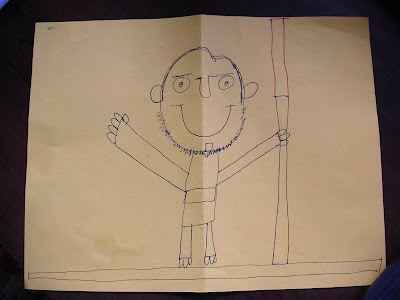 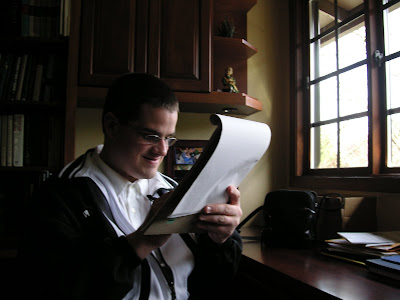 "Will you miss me when I move out?" That’s the question Phil asked me as I sat at the computer and he sat at my desk. He has asked me before but not very often. I usually have questions after offering assurance that I will indeed miss him.
“Where are you going to live?
“I’m going to buy a house…close by.”
“Where are you going to work?”
“I don’t know yet.” Later he says “I’ll be the host of Sonny’s Family Feud.”
“How are you going to pay for your house?
“My wife.” (laughter)
“When are you going to get married?”
“In a thousand years or in the millennium.”
“Who’s going to do the grocery shopping?”
“I will…at Sam’s Club.”
“How will you get to ‘teen club’?”
“My own car.”
“What kind of car?”
“A white Ford pickup.” (It used to be a red Toyota pickup.)
“Who will tie your tie on Sunday?”
“My wife.”
“Who will tie your shoes?”
“You will. Call me. I’ll have a computer with Skype and an answering machine.”
He told me to say "The End."
Posted by Pat Tucker at 4:45 PM 2 comments:

The Key and Dollar Bills

When our neighbors, the Cs, go out of town, they always ask Phil if he will pick up newspapers in the morning and their mail in the afternoon. Phil loves to do this and never has to be reminded. When they return and come to our house to pick up the papers and mail they pay Phil $1 for each day they are gone. After one of their trips I told them Phil loves dollar bills so they have been paying him in one dollar bills ever since. 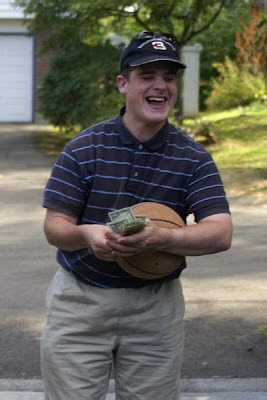 After this last trip the Cs came to the house for their papers and mail while Phil was gone to “teen club” so he was unable to give them their mailbox key which he always puts on his keychain. When he came home I told him to just take the key to them. He told me he was scared to do it. “Phil, you’ve known them your entire life—just take it to them.” “I’ll mail it to them. No, I’ll give it to them at church.” I was surprised at how much anxiety this was causing. Today he pulled the key out of his pocket again to show me he still has it. I told him to walk up there and give it to them. “Will you go with me?” I did but I made him ring the doorbell, hand over the key and say thank you for the money. (Mr. C turned to me for a translation. Phil has cluttered speech that is often hard to understand.) He did it all with a smile and then turned around and headed home leaving me behind.
Posted by Pat Tucker at 7:38 PM No comments: 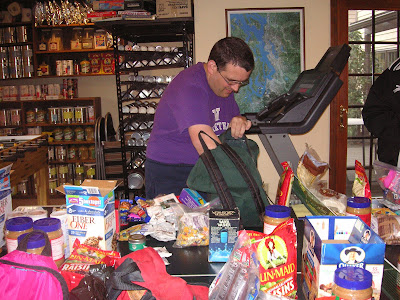 It was time today for the semi-annual refreshing of our 72-hour kits. I was told many years ago by a woman in charge of emergency preparedness in our city that in case of a major earthquake we should not expect help of any kind for 72 hours and so we had better be prepared to take care of ourselves. We are trying but hope that we never have to find out just how prepared we are. A few years ago we collected discarded backpacks our kids used in high school and filled them—one for each of the five of us living under one roof. Some of the items are peanut butter, raisins, hot chocolate packets, granola bars, hot cereal packets, beef jerky, fruit leather, hard candy, emergency flashlights and radio, toilet paper, pads of paper, pencils, candles, matches, a few packets of water, emergency blankets, and so on. Clark and Phil helped bring in the backpacks from the garage, replaced the October ‘09 items, and then took them back to the garage where the backpacks hang on hooks. It is a good feeling to know we are prepared for the next six months. 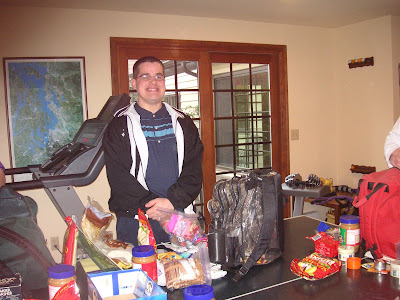 Posted by Pat Tucker at 8:35 PM No comments: