It is Saturday morning and the house is quiet. The boys are bowling and won’t be home until noon and Paul and I are in the study, preparing for upcoming lessons. I love the quiet made sweeter because of the principle of opposition in all things. I would not appreciate it as much if I didn’t know that soon there will be an explosion of noise and activity with interruptions and talking and requests (or demands).


Five or ten years ago we began the tradition of decorating for Christmas the day after Thanksgiving and it happened yesterday. Clark and Phil started getting excited BEFORE Thanksgiving so after the okay was given they hauled down boxes from the attic and put them in the front room and piano room. We worked most of yesterday afternoon. I have to admit our front room looked like an idyllic scene with a fire in the fireplace, Christmas music playing (Josh Groban and Acapriccio), egg nog being sipped and everyone together (at least the five of us who live under one roof). But there were also outbursts of impatience and reminders not to name call. Phil was easily distracted. After five or six hours we quit for the day (for sanity’s sake) and resumed today. In the midst of it all I ask myself if it is worth it (so much decorating and staying on top of reminders to help) so, a few years ago, I wrote on one of the boxes in big letters “IT IS WORTH IT!” And now after a few hours put in today we are finished and I can say with certainty “IT IS WORTH IT!” Now we have five weeks to enjoy it. 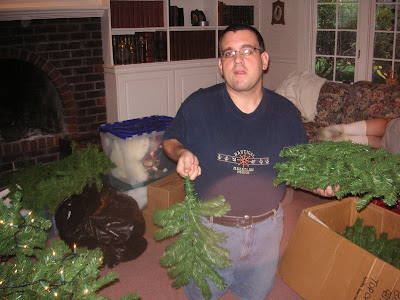 Notice who is helping and also notice who is on the couch in back of Clark. Naptime occurred during decorating.
Posted by Pat Tucker at 5:18 PM No comments: 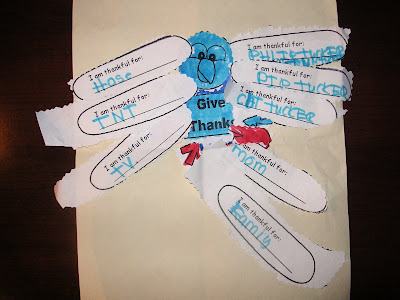 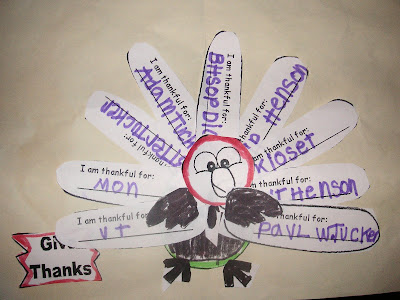 I have written about (August 1) “Teen Club” before—a once-a-week meeting held at our local community center for 2 ½ hours for adults with developmental disabilities. I don’t know how many years it has been in existence but I discovered this wonderful program about two years ago and Clark and Phil have been going ever since. I especially like it because it is within walking distance. Recently they each came home with “Give Thanks” papers which, after reading, I put on the refrigerator.

I have heard that for most of Phil’s 33 years. “Phil, we have tickets to the Paramount to see River Dance. You’ll love it!”

“You will go and that is final.”

He goes and, of course, he loves it. He can’t keep his feet still nor stifle laughter of pure pleasure and delight. When the show came to an end Phil jumped to his feet, clapping harder and louder than anyone I’ve ever heard. He enjoyed the fact that he was responsible for the standing ovation.

Yesterday I needed to pick up some items at Safeway. “Phil, I’m going to the store and you’re going with me (he had already done a number of things around the house plus watched two hours of TV).”

“I know your strategy” I tell him “you want to watch TV all by yourself (Clark was going somewhere with Paul).” He laughs.

“You are going so get your shoes on.”

He finally does and we leave for an hour of mostly fun. He is energetic, happy and helpful and occasionally over the top in his exuberance. It was senior citizen day so cookies and coffee were set out. I thought Phil was helping himself to only a cookie or two but he continued to reach into his bottomless coat pocket for more cookies as we shopped. In the car going home he reached in again and got out a cookie for me and another one for him.

Later that night while I was brushing my teeth and getting ready for bed Phil came in and said "That was fun--going to Safeway with you."
Posted by Pat Tucker at 12:36 PM No comments:

Today has been better and I have not felt annoyed. In fact we did something together that I almost always enjoy. Clark, Phil and I went to Sam’s Club this morning to fill the van up with gas and buy $243.56 worth of groceries. Phil always asks for the keys after we arrive there and then as we are walking the two minutes to the store he presses the lock button over and over until I tell him to stop. When he is through with that noise he claps his hands and yells in short bursts because he can hear an echo coming off the building. I know I should rein him in but I think it is funny. After showing my card Clark and I took off immediately with the cart and started loading. Phil always has to watch TV. The next time I saw him he had a twenty-pound box of laundry detergent with him. Clark and I had already put one in our cart but I decided we could use an extra box. After checking out we then did something we have not done in a long time. We each bought a hot dog and drink for $1.64. A typical jumbo size hot dog has 180 calories and 18 grams of fat. And that is why we don’t do this very often. Yum, it tasted so good with mustard and onions and relish spilling out all over. When we arrived home everyone pitched in and helped carry in groceries. I always appreciate their help! It has been a good day and soon I will leave for literary club to discuss Beowulf. I don’t think I have ever read it and was delightfully surprised to find myself enjoying it so much (translation by Seamus Heaney). 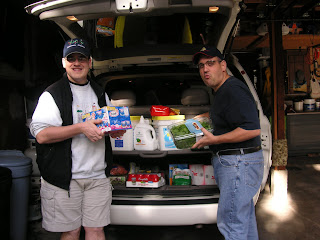 It is 6:00 p.m. and Paul just left for racquetball at a local community center. I stood up from the computer which is on my desk to wave good-bye. Waving good-bye is a tradition at our house and if I am at home I make sure I am at the window or door to wave to whomever is leaving. Over twenty years ago I wrote a few lines about that when Cherlyn left for school one morning.

I centered myself at the window
Watching my seven-year old
Skipping and smiling, then out of sight…

I thought at the time as she skipped down the street with her pigtails bouncing how our home was the center of the universe for her. She would return just as the other five would. The time would come though when friends and outside activities would beckon. Three have left and now their new homes have become the center of the universe. For Clark and Phil our home is still the center and for Paul and me. We spent the past six days in Chicago for fragile X meetings and now we are home and centered. The first day back after being away implants within me mixed emotions. I am grateful to be home safely and with my family again and yet I am easily annoyed by so many interruptions and noise and “Stop calling me names...” and "My sweats have a hole." (Put them in the black hole normally called the laundry room.) and "I'm telling." The silence in the study is wonderful and soothes me while Cherlyn is doing dishes (I fixed dinner, Phil helped set and clear the table and Clark will unload the dishwasher). I know the TV is on because I can hear Philip whooping and hollering and I feel guilty that I’m allowing it right now but I want to be alone until Paul returns. Then it will be time for me to cut hair while we watch something together and that is always good.
Posted by Pat Tucker at 6:50 PM 2 comments: 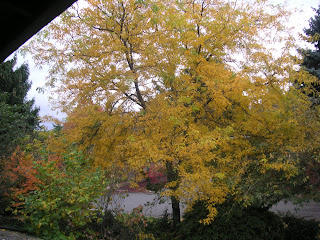 It has been such a beautiful fall in the Northwest. As I sit at my desk I can see my next door neighbor’s tree (I am ashamed to admit I don’t know what kind it is) which now has yellow leaves. From the back of our house I can see our own tree, a scarlet oak which replaced our giant willow tree which came down about 6-7 years ago. It was huge when we moved into our new house in 1975. I love weeping willows but it was always shedding something. It was the last to lose its leaves each fall and the first to bud, announcing that spring was not far away. I was sad to see it come down but have enjoyed the oak. We didn’t realize when we bought it that it holds onto its leaves (which turn brown in November) and drops them in April right before new leaves appear. I like that. 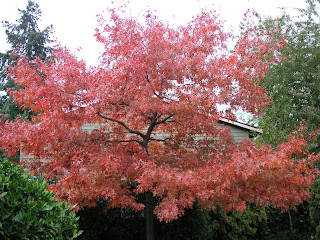 Paul, Clark, Phil and Cherlyn were out a week ago mowing, edging, and pruning (one of the last times for the season) while I worked on finances and cleanup in the house. Two days ago the five of us, along with about 40 others, went to a105-acre horse farm on Vashon Island for a service project. It was donated to the church as recreational property. There are no longer any horses. Cherlyn watched young children while we, Clark and Phil included, pruned back blackberry vines, bushes, and weeds so that the white-painted wooden fence was more visible. The temperature was in the high 50s making it very comfortable to be working outside. Periodic sprinkles did not slow us down. Gortex coats are a must if you live here so we would just put up our hoods. Clark and Phil stayed with us for two-three hours doing their share of the work. One of Phil’s main jobs was to laugh at everyone’s jokes. As we were returning home on the ferry Phil said “That was fun!” and it was.
Posted by Pat Tucker at 3:12 AM No comments: