Paul and I stood on the side porch this morning saying good-bye to Phil who we could not see, only hear, laughing and making comments. He was on the other side of the 8-foot tall arborvitae (the hedge we planted about 25 years ago) on his way to “teen club.” “Tell Clarkstein to take his pills!” we heard him yell as he traveled along on his scooter on the dead end street that runs alongside of our yard. 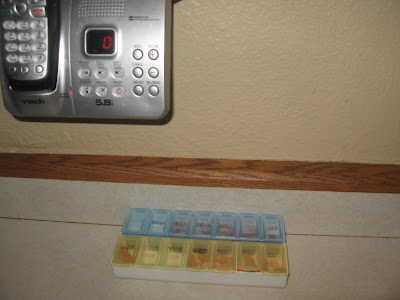 We leave Clark’s pills out (vitamins and seizure medication) on the counter so that at least one of the five of us will remember. And usually someone does. I went in the house and checked. This morning Clark must have remembered all on his own because his morning pills were gone and he was now ready to go out the door to “teen club.” He had made his lunch and unloaded the dishwasher. They would both return in three hours, separately.
Posted by Pat Tucker at 8:29 PM 1 comment:

Wednesday morning I told Clark and Phil I was taking them somewhere special and “You will like it.”

“Tell us. Where are we going?”

“I’m not telling you but I know you will like it. We’ll go after track practice.”

At 6:20 we left for our exciting adventure—the three of us, my two sons with fragile X and me. I was taking them to Shoreline Live!, an annual variety show featuring music and dance, written and performed by individuals with disabilities in the Creative Arts for Life class. Excitement mounted as we drove north and then it exploded into high fives, shouts and laughter when we finally entered the auditorium and Clark and Phil saw many of their peers sitting on the front row ready to perform. There were about 20-25 friends who also participate in Special Olympics and “teen club.” During the 1 ½ hours, the duration of the program, I thought about the eight months of weekly classes to get to this point. I thought about my gratitude for all those who patiently work with people like my sons. And I thought about how much more exciting and meaningful life is for all these participants who exuded confidence and enthusiasm. I thought about this again Saturday morning as I sat in the car in the parking lot by the field where Clark and Phil were practicing their running for the state Special Olympics track and field meet coming up this Saturday. I watched one of their teammates arrive late. He shuffled by my car so I watched him as he approached the speed bump, about four inches high. He paused and then hoisted himself up on top, another pause, and then down the other side. He eventually made it to the field where patient (and sometimes not-so-patient but always encouraging) volunteers coaxed him to walk faster. I think he was programmed for only one speed—but he kept going. I silently cheered for him as he came in last, waaaay last. I thought about all those on the team who could have been at home on a Saturday morning, probably watching television, but instead were outside getting lots of exercise and learning and relearning how to stay in their own lane and go faster.
Posted by Pat Tucker at 10:27 PM No comments:

I have decided I will not stay at home if we ever allow professional (and that is a very questionable title) pruners on our premises again. I admit we would be living in a jungle if it were up to me even though I know pruning is good and necessary. We had them here on Friday for a few hours and I couldn’t wait for them to be gone. We paid them good money to prune trees that I couldn’t and wouldn’t do. Now we have trees that I think are too thinned out and too chopped off. While I was inside the house, churning, and with earphones on, Clark was outside watching, and enjoying, all the cutting and chopping. 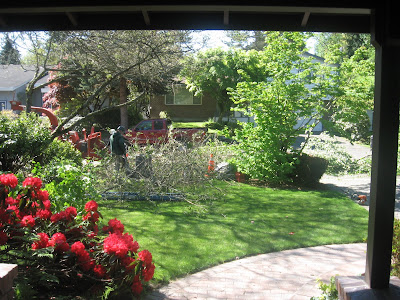 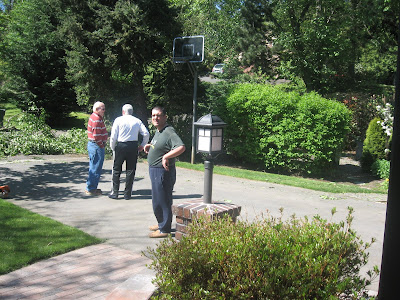 Posted by Pat Tucker at 9:43 PM No comments:

The gift of warmth and a visible sun was ours last Saturday when we went to the invitational track meet. It is a casual event. We dropped Clark and Phil off close to the track and bleachers and went to park. By the time we walked down to the track Clark was running the mile. “What in the world is he doing in the mile?” we asked each other. We soon found out. He was supposed to get in the line for the 100m and by mistake got in the line for the 1600m. He ran much of the first lap but then stood on the sidelines for the next two and joined in for the final lap. We were very proud of him for completing it. I am sure he wondered, but couldn’t verbalize, why his race was going on and on and on. They participated in their regular events—shot put, 200m, 100m and relay. We celebrated a good day for all by going to MacDonald’s for ice cream.

Clark decided against taking his ribbons to church for show and tell. 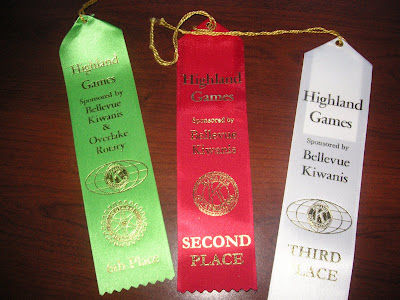 Phil, without fanfare, quietly deposited his ribbons in the garbage when he arrived home. I guess he has decided that medals are the only ones worth keeping and the Invitational only gives out ribbons. 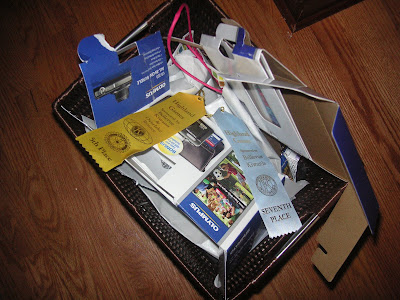 Posted by Pat Tucker at 5:45 PM No comments:

On one of the most beautiful days of spring we gathered for the district Special Olympics track meet a few miles from our house. What a contrast to one district meet a few years ago when the temperature never left the mid 40s. The wind blew and the rain wouldn’t leave us alone. We were happy to have that day come to an end. But not the district meet this year. No better way to spend a Saturday—watching two of my favorite people competing while feeling the warmth of the sun. Competing is not really an accurate word for Special Olympics. Yes, getting a medal determines whether they will go to state (and we have already been told that both will be going to Ft. Lewis the first Saturday in June) but it is about being with peers, feeling special, hearing the crowd cheer, eating lunch prepared by a local club or church and going home with medals and/or ribbons. Tomorrow is an invitational track meet and according to the weather report we will be watching it in the rain. 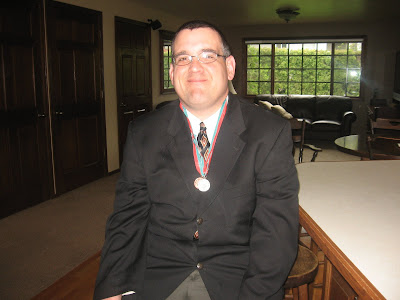 Clark taking his medals to church so he can show people.

When Phil's brother who lives in Australia saw this video clip he responded with this: "Tell Flip-zip-the-big-fat-lip that he’s a goofball for doing “raise the roof” as he’s coming down the home stretch. Was he racing against a bunch of people on crutches? He had them beat by 100 meters or more. How long was the race?"
Posted by Pat Tucker at 6:15 PM No comments:

“Get away from me. I have a show to do.” This was said with laughter, yet firmness, as Phil ran away from Paul and planted himself in front of the TV. Paul wanted to wrestle but Phil had his own agenda in mind, watching and participating in The Price Is Right. After all, who would announce “Come on down!” with George Gray, the newest announcer. Phil became hooked on The Price Is Right when Grandma moved in with us for just a few months and that was eleven years ago. The two of them would watch together. 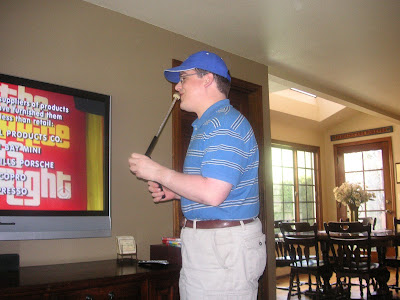 Through the years Phil has received many microphones as gifts but his favorite is a drumstick he received from one of his brothers many years ago. He does use a second (gift) microphone for the show case. These two should last him for many years. 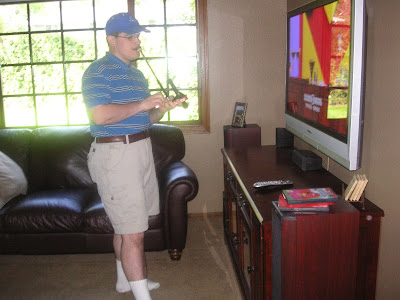