We’ve been away from home for almost two weeks gathering memories from a family vacation. Paul and I had meetings at BYU-I for a few days so we headed to Idaho by van early one morning two weeks ago. While we were in Rexburg, Clark, Phil and C stayed with Uncle T and Aunt G. We had planned also to go to Utah to visit family and friends but our plans changed when we decided instead to go to West Yellowstone where we saw Beauty and the Beast at the Playmill Theatre plus three IMAX movies plus three documentaries on Yellowstone, bears and wolves. After two nights there at the Ghetto Motel which featured a bent and torn window screen, a large hole in one of the box springs, fitted sheets that had to be refitted during the night and were off again by morning it was time to move on. We spent a day in Yellowstone Park which was established by Congress as a national park and signed into law by President Ulysses S. Grant in 1872. As a result of that visitors from all over the world (more than three million last year) can enjoy the incredible diversified beauty plus the wildlife. We saw bears (black), elk and bison and grizzly bears and wolves in captivity. When we emerged from the park we found an abundance of “no vacancy” signs and had to travel 45 miles to Livingston in the dark, praying we wouldn’t hit a deer, to find an available motel. The next day we traveled home.

Clark and Phil missed two practices for Special Olympics softball last week while we were gone. This morning before Paul and I were even out of bed Clark showered and dressed, even putting on his shoes, and then came into our room with his baseball mitt. By the end of the day, though, he had had a few seizures and was not feeling well. While I am typing he is sitting beside me in a chair, asleep, while Phil is at practice. 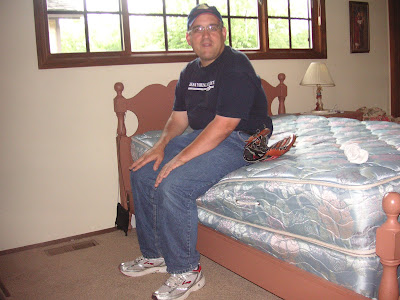 Clark is watching me while I sort recycling and garbage in C's room.
Posted by Pat Tucker at 10:13 PM No comments:

I couldn’t think of anywhere I would rather be and yet I haven’t mentioned anything about the state track and field meet which was a week ago yesterday. It was a practically perfect day from start to finish, a beautiful 70ish day (appreciated even more so since we had had weeks of rain) 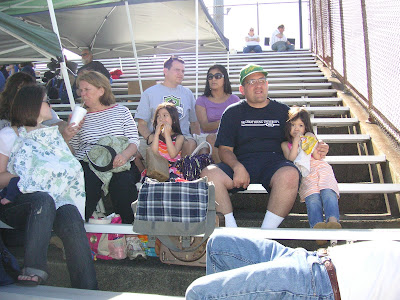 and two of our married kids and their families came to cheer their brothers on. We were up early Saturday morning so we could be at Ft. Lewis for the first event, the shot put, which both Clark 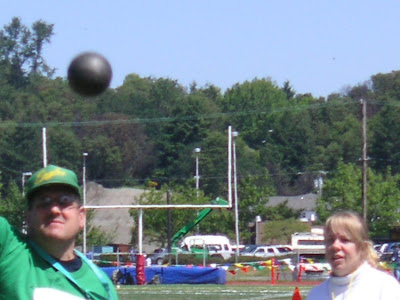 and Phil participated in. They were not in the same heat and both came in 4th place which 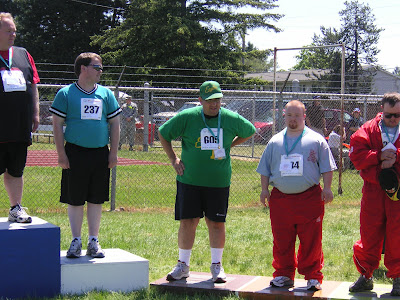 meant a ribbon, not a medal. And that was it for Clark. He had two events on Sunday but some years ago we stopped having them participate on Sunday. When Clark started Special Olympics about 25 years ago he was in middle school. His large team would leave Seattle by bus on Friday afternoon, stay in the barracks Friday and Saturday nights, participate in events Saturday and Sunday and return to Seattle late Sunday afternoon. Phil started a few years after Clark. We would drive down to watch them participate. After a few years they no longer went down on a bus and did not spent the night in the barracks. It was just too much for coaches and chaperones. It became the responsibility of parents or caregivers to get the athletes there each day. Since we did not feel good about Sunday participation they stopped going and only participate on Saturday. Phil had two more events on Saturday, the 200m dash and the 4x100 relay, but he only got ribbons. This is one of the few years Clark did not take medals to church the next day for show and tell. 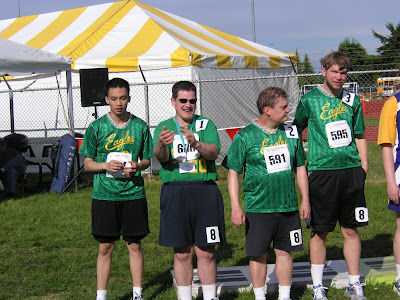 As tradition dictates we went to Taco Bell after the meet.
Posted by Pat Tucker at 7:53 PM No comments:

Last Tuesday and today have been work-outside days. The other days have been called rainy days. A week ago Paul, Clark and Philip filled in a trench in our yard which they dug a few weeks earlier trying to find the broken water pipe. They were successful but it took days to find it. 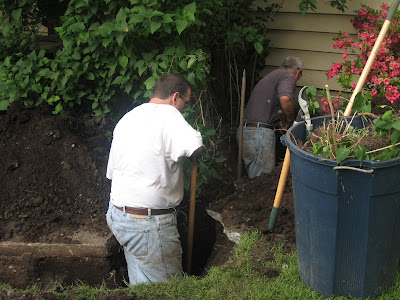 Paul and I had come home from a walk early one Saturday morning to a new addition in our back yard, a miniscule pond with water flowing into it. There was our first clue that something was amiss. A plumber was called and a leak detection specialist to find the route of the outside water pipe in our 35-year old house. I won’t bore you with all the details that eventually led to getting the pipe fixed but I will tell you this—there is nothing like having a broken water pipe fixed to make you appreciate hot and cold running water that easily comes out a tap in many rooms in the house. How quickly, though, you can get back to taking it for granted. As the last of the trench was getting filled in Clark reached his limit and slammed down the rake, breaking off the head. Someone else had reached his limit and informed Clark that he would have to buy a new rake.

Here is Clark in self-imposed isolation thinking about his punishment. It takes him a while to understand it is the natural consequence of his action. 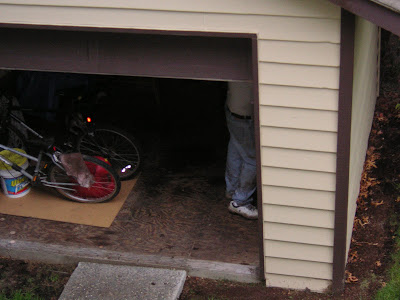 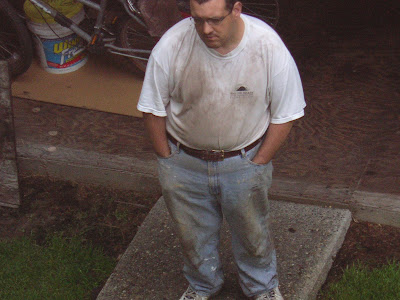 Posted by Pat Tucker at 8:17 PM No comments:

We didn’t even see the build up—just the explosion. Friday night a good friend of our youngest daughter arrived at our house with three friends. They had traveled many hours to visit the city where Carly grew up and left eight years ago. We knew they were coming. We had invited them to spend the night with us when plans were in embryo and now here they were. We were gathered in the kitchen getting to know the three we had just met. Clark was clearing out the dishwasher with one of the friends who had offered to help. I was impressed. I asked Philip to go to attic and get the blow-up bed. He left and we continued talking. Five minutes later Phil burst into the kitchen with the bed and crying. I am convinced he had fallen down the stairs and is hurt. Just as I am getting up to go to him I hear a hysterical voice “Clark (he points at him) said it. (Clark is happily clearing out dishes with Tyler.) He said ‘Knock it off Philip.’ I don’t like it.” Paul, who is standing right by him, tries to touch him, to calm him, but he is in full fury and stomps off yelling about Clark who is strangely silent. I was shocked that Phil, almost always the happy one, would put on such a display in front of strangers. Usually before this happens we’ve seen a build up, some name calling, some sign, but we had not observed anything. “Welcome to our house.” I smile to our guests. What else can I do? I wish they had not had to witness this but this is life, the real thing, at our house at least a couple of times a year. Phil goes into the game room with Paul on his heels. They emerge a few minutes later, gather Clark, and go upstairs. Eventually apologies are made, happiness returns and Clark and Phil rejoin us downstairs.
Posted by Pat Tucker at 10:20 PM 1 comment:

It's That Time Again 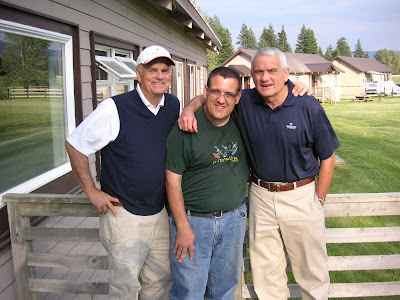 Today is the annual Fathers and Sons outing at the Church Ranch. I’ve been hearing “I can’t wait!” with increasing frequency these past few weeks. Golf clubs came out of Clark’s closet on Monday to decorate his bedroom floor. Phil’s hand-me-down clubs came out on Wednesday. Prayers from Clark have been offered that the rain would stay away so they could go golfing. It was not looking hopeful early this morning but as the time for the three boys plus one good friend to leave approached the rains stopped and the sky lightened. Extra clothing was packed anyway…just in case. Now it has been three hours since they left. I am sure they are on the golf course making new memories that will be talked about as soon as they get home this evening and then tomorrow and then the next day. There was the time Phil took off in the golf cart and drove out of sight, returning in a few minutes with a dent in the back bumper. We'll never know for sure what happened. The manager forgave him and didn't even charge him for the damage. 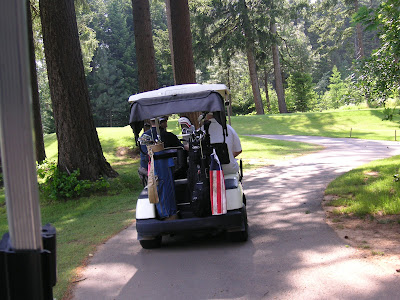 The next year Phil looked for, and found, the golf cart with the dent. After golfing they will go to the Church Ranch for a hamburger dinner. Instead of spending the night as many fathers and sons will do they will return home.
These pictures are from last year’s outing. 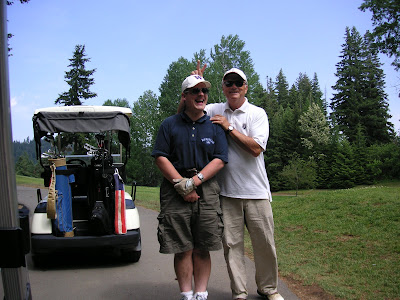 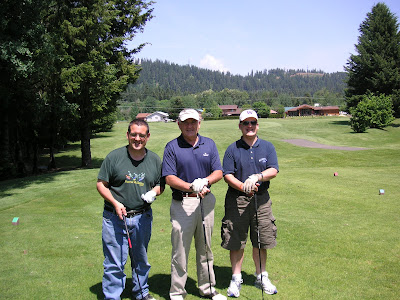 Waving from a Distance

I like those small interactions that connect an immediate or an extended neighborhood—the eye contact when passing each other on the sidewalk, the greeting, the wave, the comments, children at the same school. The proximity of our houses brings us together but that doesn’t guarantee friendship or sometimes even acknowledgement.

Recently as I was taking a walk my friendly, extended neighbor (a long block away) saw me coming, turned off the lawnmower and removed his earphones. I've known Joe and his wife for many years. If he is outside when I pass his house he smiles and steps onto the sidewalk where we share conversation. He has been retired for some time now but his wife is still working despite battling cancer. I know about their two children and grandchildren. I have learned about bits and pieces of their lives in irregular snatches. After the “how are you?”s on that particular day he asked me my son’s name “You know, the shy one.” I smiled and told him “That would be Phil.” He has seen him out taking his mandatory five-days-a-week walk. Then Joe continued “I’ve tried to get him to say hello but have had no luck. Then the other day I saw him on the other side of the street down a ways and I waved. And he waved back. Now whenever I see him I wave and he responds.” Joe was sincerely pleased with this progress with Phil.

Maybe someday Phil will even say “hello.”
Posted by Pat Tucker at 4:24 PM No comments: